Chanakya Mandal Pariwar was consciously founded on August.10, 1996. Exactly 10 years before this, Gen. Arunkumar Vaidya was assassinated in Pune by Khalistani terrorists and the same day A.B. Dharmadhikari received his appointment letter for IAS: this was the time when A.B. Dharmadhikari was working as a full-time social activist, a teacher, and a freelance journalist. Gen. Vaidya laid down his life in service of this country and now Chanakya Mandal wants to develop the army of youth who would live in service of the country and the world.

Every year this day of August 10 is observed as ‘Foundation Day’ (Adhishthana Diwas) Adhishthana: ‘Adhishthana means to begin. ‘Beginning education, consciously beginning to develop one’s character on one’s own is the meaning implied in ‘Adhishthana’.

We are happy that you came to Chanakya Mandal Pariwar, our home, our temple as students eager to study and gain knowledge. We will hand over to you whatever knowledge we have with all the necessary additions. While giving knowledge to you we too will gain knowledge. May you all become students with independent thinking minds, who will make our culture prosperous. So now, let us all together, with a clean and pure mind begin our penance for acquiring knowledge. 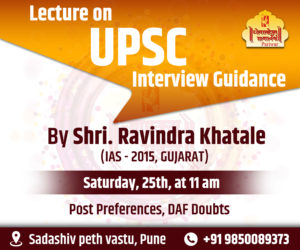 Those who have made their decision to become ‘Sadhakas’ in their own chosen walk of life take the following resolve (Sankalpa). The word ‘Sankalpa’ indicates a strong decision – a resolve that one consciously makes with oneself, within one’s own mind, heart and soul. The concept of ‘Sankalpa’ at Chanakya Mandal Pariwar is one small, but significant expression of the ultimate principle of responsibility, of accountability: that is: one is ultimately accountable – answerable to one ‘Self’.

As of now two ‘Sankalpa’ is suggested for everyone at Chanakya Mandal Pariwar: First Sankalpa is for everyone and the second one will differ from profession to profession. One presented here is for those who want to join civil services. Taking ‘Sankalpa’ is certainly not compulsory – that is against the spirit of ‘ Sankalpa’. Only when one really wants to make such a resolve, to oneself, is this ‘Sankalpa’ to be taken.

I shall lead a happy life. I shall perform my duties
happily in my life. I am one with the people around
me, society, country, universe, and nature.
Therefore, I am responsible for the happenings in
my life as also in the universe. After realizing this I
will create a happy and enriched life by following
the values of excellence and creativity.

The administration should be clean, responsive to
people’s aspirations; it should promote all-round
development and national integration. To attain
this goal, I will join the civil services. So, I will try to
succeed in competitive examinations. At the
individual level, I will remain clean, efficient and
impeccable and I will endeavor to imbibe in the
administration the same qualities.