Though I consider myself to be a member of Chanakya Mandal Pariwar since even before I was born, I formally joined it through the UPSC Comprehensive course of 2016-17. Since the commencement of the course, the insights about the examination in particular and life, in general, were aptly shared by Shri Avinash Dharmadhikari Sir. The fundamental principle of ‘Knowing Thyself’ changed my inclination towards the field of Armed Forces. So, I started working towards making a career in the Indian Army and CAPF through UPSC CDS and UPSC CAPF respectively. As my basics were already structured during the comprehensive course, the switch from CSE to CAPF was trouble-free.  Before being recommended as an Assitant Commandant in ITBP with AIR 47 in 2018, I had a fair share of failures as well. I got merit out in CDS 1 and CDS 2 of 2017, CDS 1 of 2018 as well as CAPF 2017. Throughout this struggle, I was fortunate enough to have had the blessings of Dharmadhikari Sir. For me, he was not only a source of motivation but a lighthouse to a stranded ship.  His words, “Abhang, I know you will do it” kept calling my boat to the shore of success.  Not so long after the declaration of result, I underwent rigorous training in ITBP Academy at Mussoorie. I take pride in admitting that if I wasn’t a true CMPian I would have not to be able to go through such meticulous training that transformed me from a civilian to a soldier. I am blessed enough to say that I not only completed the training but also achieved the rare feat of getting three trophies (Best Indoor Trainee, Best Conduct and Overall Best Trainee) which happened for the first time in the history of ITBP and got conferred with Home Minister’s Sword of Honour. The lion’s share of the credit for my entire journey goes to Dharmadhikari Sir and Chanakya Mandal Pariwar. Jai Hind!

I had a very good experience with Chanakya Mandal Pariwar. The best part was elaborated feedback given to me on my personality, speaking style and knowledge by Avinash Dharmadhikari Sir and other panel members.

Chanakya Mandal has immensely helped me to shape my worldview in conformity with eternal and age-old values of Indian civilization. All the aspirants who wish to excel in their careers will certainly gain true knowledge with a sense of purpose by actively involving themselves in various activities of this Institution.

I was a student, Karyakarta and faculty of Chanakya Mandal pariwar for six years. Those were six most enriching years of my life. I always feel very fortunate to have a Guru Avinash Dharmadhikari Sir in my life. Chanakya Mandal pariwar attracts talented youth from Maharashtra and institute is now providing clean and efficient officers to Maharashtra and entire Indian administration. I am very happy to be part of this great tradition

Avinash Dharmadhikari Sir & CMP has been an inspiration to the likes of us. He has been a constant support through thick and thin. He has imbibed the process of “being” a good officer in me. “Being” has a special mention because the process is never complete and bureaucracy is not insulated from social, political, economic and technological changes. Just as we say Human Being wherein the process of being human is continuous and does not stop. So has CMP imbibed the spirit in us to march towards perfection and professionalism with utmost humility, fairness, honesty, integrity and firm commitment while carrying out the sovereign functions of the state. Thank you, Sir and CMP.

There are many institutes which can guide you in your journey of becoming a civil servant, but there are few which help build character as well. Chanakya Mandal Pariwar has been the crucible in while steel of my character has been tempered under able vigilance of Avinash Dharmadhikari sir. Had it not been for him, my poor mother would have never been able to support my preparation as I would have to pay the fees which he waived for me. I am indebted to him, and to CMP, for making me who I am – a Karyakarta Adhikari

Asst. Commandant Border Security Force (BSF) Chanakya Mandal Pariwar has always been home for me. I was brought up here & it has been almost 10 years I am a part of this huge family. What I find here attractive is the evolutionary & revolutionary spirit. Once you are here, you start to believe in bringing revolutionary changes for the better future of India. Hope is life; if you don’t have the hope, you can’t have the life. At Chanakya Mandal Pariwar you will always find that hope. 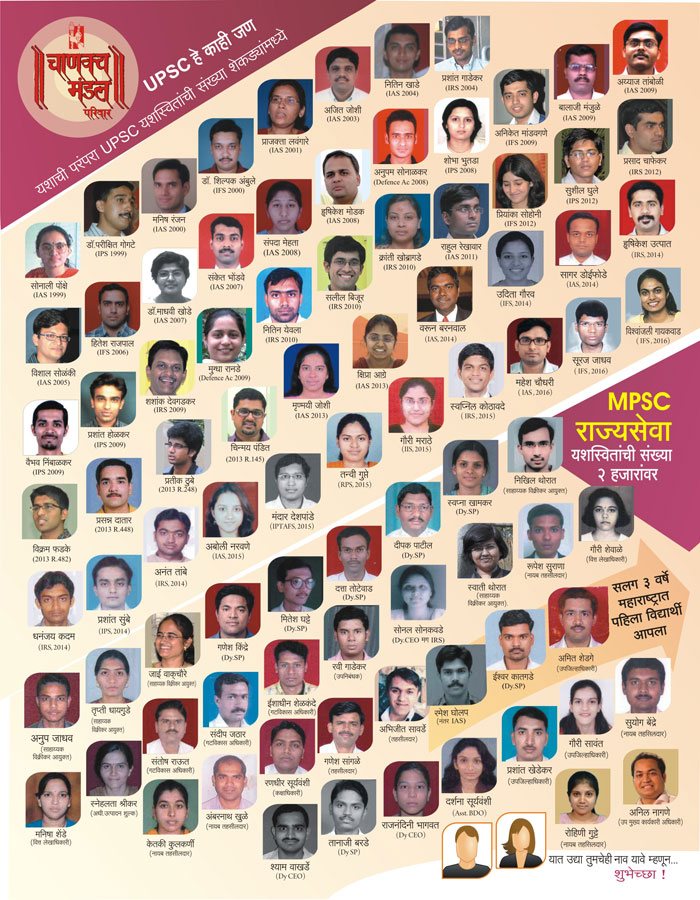